Few horse racing venues can boast the amazing track record of the world famous Belmont Park.  Established in 1905, “The Champions Track” is home to the Belmont Stakes – the third jewel of the Triple Crown. This grueling 1 1/2 mile race is the longest of the three Triple Crown events. One of the Grand Daddies of horse racing, Belmont Park is located in Elmont, New York, and has been the coronation site of 12 Triple Crown Champions.

Next to historic Churchill Downs in Louisville, KY, Belmont Park is one of the best known pony-betting venues in North America. Nicknamed “Big Sandy” due to the massive amount of sand that buffers the dirt track surface, Belmont Park is home to legendary Triple Crown Champions such as Secretariat and Affirmed. 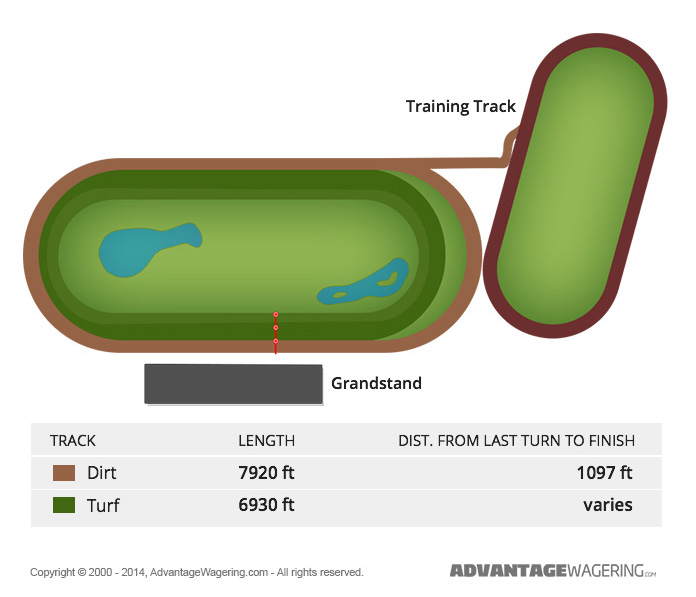 Stakes races and major events are measuring sticks of top horse racing venues the world over. Boasting not only the final leg of the Triple Crown, but also being the past and future home of the Breeders' Cup World Championships, as well as the G1 Metropolitan Handicap and Man O' War Stakes, confirms Belmont Park as an elite, world-class horse racing venue.

Whether it's Secretariat winning in a 31-length romp to capture the Triple Crown in 1973, or Birdstone upsetting heavy favorite Smarty Jones to spoil his championship bid in 2004, the Belmont has provided horse betting fans with countless memorable moments. The "Test of the Champion" is held five weeks after the Kentucky Derby and three weeks after the Preakness.

First run way back in 1891, the Metropolitan Handicap is part of the New York Triple Crown Handicap series that includes the Suburban and Brooklyn Handicap races. Legendary jockey and horse tandems, such as Bill Shoemaker guiding Forego, and Pat Day aboard Gulch, have graced the Belmont Park winners circle after the running of the 8-furlong "Met Mile".

Inaugurated in 1959, this Grade 1 race is named in honor of the great Man o' War who sported a 20-1 lifetime record. Raced annually in July, the Man o' War stakes goes 1 3/8 miles on turf. Winners of this prestigious race include Secretariat, two-time winner Gio Ponti, and Fantastic Light. The winner of the Man o' War is often a top favorite to win the Breeders' Cup Turf race in the fall.

Find the best odds for your horse online and place your bets within minutes !

Breeders' Stakes: Dancin in Da'nile belongs on the grass